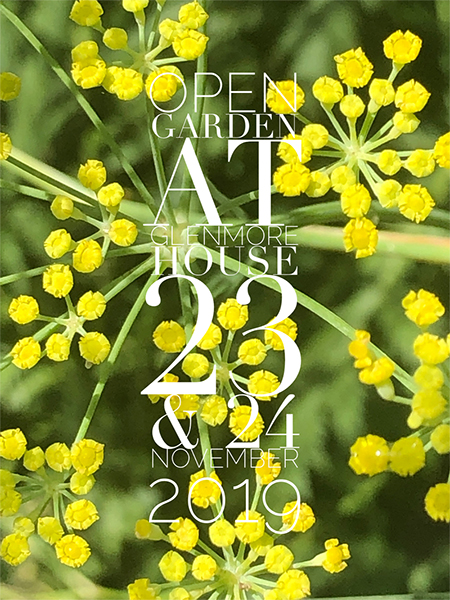 Where it’s all about fennel….

The wait is over…the weekend is almost upon us! Oh what a build-up it’s been and I feel quite anxious, I can assure you!  But excited too, that our SPRING GARDEN FAIR to celebrate 30 years at GLENMORE HOUSE, is this weekend, 23 & 24 NOVEMBER…rain, hail or shine….or should that be wind, smoke, heat or dust? Possible showers? Possible thunderstorm? Whatever the weather, please, do not be put off…because there is plenty to enjoy!

Keeping the garden going certainly hasn’t been an easy task in these drought-stricken times. Of course we haven’t got everything done, and already the list for next week is long! But thankfully the early mornings and evenings here have been cool, allowing the garden the opportunity to catch its breath before the next day’s onslaught. (But yes, you will see gaps, where planting anew would be foolish ’til the situation improves). On the whole, the plants here are drought tolerant, but that doesn’t mean they don’t need some water, and over the years, with a little helping hand, each plant has found its own happy place (not necessarily where I first chose to plant it!). I’m inclined to allow plants to romp…to seed, to layer, to move themselves as they like. The garden here is not a formal one. It was created to link the restored, reinterpreted, and new buildings; and to bind the whole to the landscape. While most plants have been chosen because I’ve run off on a tangent, of course practicality plays a role too. The structure is strong, and the plants come and go with their season. But it is not a landscape designed garden…it’s a very personal one; here to make us smile. Not all of it looks fabulous at any particular time. I like that each plant has its own moment to shine…so we can savour every ounce of fleeting beauty. And it’s why we thought to open so late in the season this time….because visitors over the years have seen the pink and frothy stage at its peak….but miss the next phase…as the early summer garden hits its stride.

The garden here comes in a long wave….unfurling slowly from late August, so while many highlights are now but a memory for the year, there’s much in which to delight right now, as well many a surprise in store for the weeks ahead. All along, I’ve planned to leave the exquisite pods that the delicate peony poppy petals leave behind in the Borders….but now I’m of two minds! I usually pull them either this weekend or next, depending on the state of them and the weather…and were it not for opening this weekend, I’d pull them out! Not least because something’s taken a fancy to eating them! I know the Borders look more tidy…and take on a more substantial form once the pods are gone, but oh….then you’dmiss them! They’re not as tall this year, which is hardly surprising but they’re still beautiful. So there just may be a difference between whether you choose to visit on Saturday or Sunday!

The rose that smothers much of the fence along the house drive has been laden with flowers for weeks…flooding the garden with intoxicating perfume and how I hope they hold on for just a few more days! R.Brunonii is one that usually, only we get to enjoy. Elsewhere on the scent front, the Chinese Star Jasmine is doing a good job of swamping the Hayshed and pool enclosure and just this week, the honeysuckle on the cubby house has come into flower; spilling its sweet scent all around. The first blooms too, of Buddleija Black Knight are opening in the Borders….how I love its honey aroma….you can enjoy it as you have tea and cake in the loggia!

The oakleaf hydrangeas in the Courtyard have never been in flower for an open garden before…nor the good old mopheads that we plonked at the end of the Barn for safe keeping all those years ago…the ones in that lovely image in the book. (I’ve been covering them with net on the burning days this week in hope of recreating that photo – though we took it slightly later – they’re only beginning to colour now). The sweet peas are heading to seed, as they should, but the globe artichoke flowers next to them have burst into spectacular flower.

As hoped, the kitchen garden is awash with fennel flowers!  As well as carrot, parsley, celery….the guild and companion beds are in full flight, and all are simply crawling with ladybirds and alive with bees. I make no bones about the fact I place equal value, if not more, on a celery, parsnip, parsley, dill, carrot or fennel in flower, than any ornamental plant and will probably lavish more attention on any of those romantic companions than any other part of the garden. The traditional side of the kitchen garden displays its new summer support and shade structures and early growth, but as always I’m battling the bower birds, the sulphur crested cockatoos and every other creature that’s coming in for a feast! Podcast followers will know the space intimately, and understand exactly why a pocket of potatoes is sitting at the corner of the leafy green bed; note the successionally sown fennel, delight in groups of self seeders and see this season’s version of: “the wigwam at front left, with its cucumber, scarlet runner bean and wild sweetie tomato”…except that this time around, it’s at front right (and has a long season ahead to grow to its full potential!). How I will look forward to seeing you in the kitchen garden at 11am, on either day.

On arrival, you’ll receive a ‘garden map’ with a ‘key’ – one for each car. (I do hope we have enough…a problem with opening the garden is never having any idea how many visitors may arrive!). You’ll be directed down the drive to park in the paddock (which Larry mowed well last weekend). From there, you will enter the garden at the Hayshed, where you’ll see MARTIN BOETZ preparing lunch, with our CROQUET LAWN STALLHOLDERS all there in front of you…THE SECRET GARDEN NURSERY, PATIO PLANTS, PICCOLO FARM, JOE VINKS with his twig furniture and THE RACONTEUR (although we may move Craig and his beautiful candles to the old Stables if the sun is too fierce). Just beyond them you’ll find SEEDLIP with their botanical drinks and the URBAN BEEHIVE. Swing through the kitchen garden from here; though you could have taken a left at the Croquet Lawn and walked up through the Borders…or make the DAIRY your first stop, for a cup of OVVIO TEA and JILLIE ARNOTT’S just baked cakes (from the book); a squizz at MATILDA’S paintings, NICOLA HART’S ceramics,  pick up some delicious cheese at PECORA DAIRYand,have a big bunch of hydrangeas set aside at our FLOWER STALL to pick up before you leave!

We also have a late addition to the Stallholders: Jody Vassallo, for the FARMER COOKBOOK.  I know I mentioned this fabulous book earlier in the year when it was first published, and it’s been a runaway success.  Jody was key instigator for a group in the food industry who decided to take it upon themselves to do something to help farmers with drought relief. What they did, was compile a book of recipes, from well-known chefs to lesser known peeps (yes, even one from me!). They all devoted their skills and time to the project, and the result is a book of food and insight; where $24 of every $30 goes to the CWA for direct distribution to those most in need. Hopefully, you’ll have a copy in your kitchen, or buy one for anyone you know who doesn’t! It’s the perfect present for those overseas, of course! *Saturday only.

One more little bit of information….in the past, we’ve been lucky to have the local RFS help with parking but of course, they are very much in demand elsewhere this time around.  We were at panic stations wondering what on earth to do, when our long time plumber stepped in with a solution (he’s been replacing much of our roof guttering these last weeks). He managed to persuade local school, St. Greg’s, to encourage some of their boys to help out. A gold coin donation towards their St. Vincent de Paul Christmas appeal will be much appreciated for pointing you in the right direction on arrival and departure. (We’ll be donating too).

Don’t forget to collect a little envelope of FENNEL SEED that I collected here in late summer. Either collect from the flower stall, or we’ll leave it on a table for you to pick up as you leave. You can sprinkle it now into a little pocket of your own garden. You only need let one plant go to flower, to begin an annual fennel cycle of your own: to attract the good bugs, to eat the fronds, enjoy the pollen, the fresh seed and the sheer beauty…just as I described in that newsletter a few weeks ago….
Gosh!  Is that all?  I’ve probably forgotten all kinds of things, (please excuse the punctuation this time ’round!), but I’m out of time, with more gardening ahead, moving plants up to the Barn, and stallholders arriving from now on; so it’s all about setting up, bumping in and looking forward to seeing you here!

I’m answering emails though, so if you have any questions, please don’t hesitate to contact me.  All details are on the webpage. And don’t forget, it’s $10 entry per person (cash only) and in case eftpos machines don’t work for some inexplicable coverage reason on the day…please bring additional cash so as not to miss out.  For tea and cake in particular!

With very best wishes to all,